This is part 6 of a story jumping activity for Digital Writing Month. Bruno started it, followed by Kevin, Maha, Sarah and Ron Sign up in the Google Doc if you’d like to join in.

Kevin plopped onto his bed, exhausted. What a night. What the hell had happened? How did things get so out of hand? He never knew Sandy had one machine gun, let alone two. And, to take them to the pub with her? And fire them? What was she thinking?! The whole incident really got him wondering whether he knew her at all, and whether they had a future together. And how Sarah got involved in that fight, he wasn’t sure.  At least he’d managed to fix her uke – that was about the only thing that had gone right that night. Meanwhile, that odd woman across the road was watching his house again. It no longer freaked him out, but he did often wonder why she was so interested in the house. Maybe she wanted to buy it.

Kevin took the Bruno note out of his pocket and turned it over in his hands. He hadn’t been able to get it out of his mind since finding it in that old laptop case. He peered at the map again and tried to make out the words…

After a while, things started to get blurry, and all of a sudden the words seemed to dissolve into a garden and he found himself face to face with a spider.

He looked around, confused. Where was he? And was that a door? What happened to his bed? He had no idea where he was, but he decided to investigate what was behind his door…it occurred to him that perhaps this was all just a strange dream and he would wake up and find himself back home, in his room if he walked through that door.

Instead, he found himself in a whole other world. There was a sign in front of him:

No swimming? Where was the water? Curious, he walked past the sign, towards the large trees, looking for the body of water the sign was  referring to.

But instead of water, there was a clearing. And to his surprise there was a giant chessboard, with a mysterious, small hooded boy considering his next move.

He tried to get the small boy’s attention to ask where the water way, but the boy only seemed to speak French. Kevin  kept walking.

As he walked through a small forest, and past a strange cluster of large rocks, he finally saw a lake.

He could see an amazing glowing island full of flowers in the middle. He somehow knew he had to get there. But the water was murky and he remembered the sign warning of no swimming. He looked around – and saw there was a rowboat behind some bushes. He grabbed it and jumped in, rowing quickly toward the island. He didn’t know why but he had a gut feeling it was important he get there. As he approached, the words Blossom Island kept playing over and over in his head. He knew this was the name of the island. On the island were hundreds of beautiful red and white rose bushes. 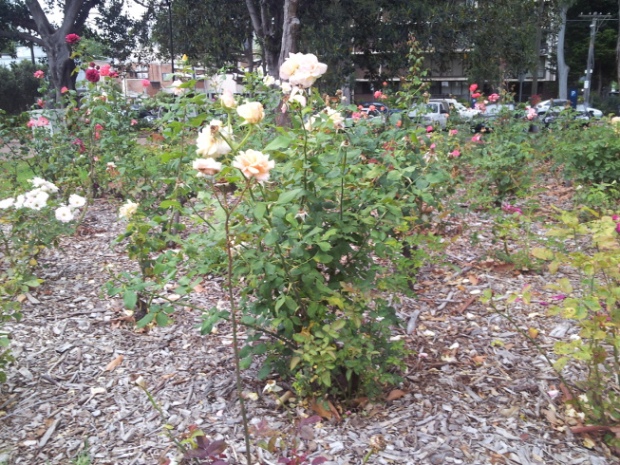 After walking through blossom island for a few minutes he came across an arch with beautiful flowers all around it.  Walking through it,, enchanted, he notices in amongst the flowers, lots of yummy looking cookies. Kevin suddenly realises how hungry he is – he’d done so much walking and couldn’t remember the last time he’d eaten. He grabbed a cookie greedily. But just as he was about to bite into it, he paused. Sudden flashbacks of childhood fairy tales played in his mind: Hansel and Gretel, and the candy covered cottage; Alice in Wonderland and the ‘Eat Me’ cake. The flashbacks were surely a warning. Who put these cookies here? What was in them? Why were they here? And…where WAS HE? The sound of his rumbling stomach interrupted his thoughts. In that instant, he threw caution to the wind, and took a huge bite.

[Footnote: this story contains images and ideas from my day out today with my 5 year old]

12 thoughts on “Digiwrimo storyjumpers 6: What does it mean?”